Taking On The Google, One App At A Time

In the past we’ve scooped the big boys, but never gone mano-a-mano.

This time is different. They don’t get much bigger than The Google, so we have thrown down the gauntlet and rolled up our sleeves.

It all started with the latest Google update to their maps app on the iPhone. The ‘Map Team’ decided that in order to conserve battery power (not such a bad goal), they would ‘dim’ the screen on their Turn-by-Turn app under certain conditions. Unfortunately, they botched the implementation, and the screen goes dark without warning. This creates a safety issue, and a lot of frustration for the driver.

A Google search for a solution, yielded absolutely nothing, nada, zero. So several months ago I started a ‘thread’ reporting on the issue, to get some visibility and put some pressure on The Google to roll back the app to the previous version without the ‘feature’. It took a few days before another person found the thread, and then over the next few weeks it slowly gained visibility.

And now, after several months, we have lift-off!

Our thread has reached critical mass, with over a thousand views and 150 plus co-commentors. Then, a few days ago Josh Lowensohn wrote an article in CNET describing the problem, and linked it to our thread. 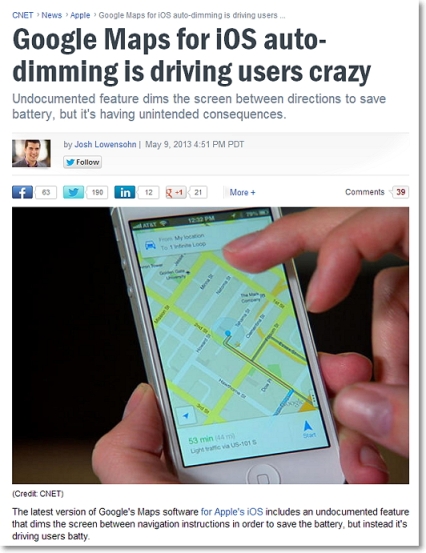 Even more satisfying, now when you begin to type into Google’s search engine that you are looking for information on “google maps iOS scre” it auto-completes before you can finish entering the word “screen dimming” and links to our thread.

The remaining question now is whether The Google will give in, and issue an update for the app before their search engine auto-complete takes over as soon as you enter “google maps”.

« All Hat, No Nukes?
Just In Time For Towel Day, It’s Exoplanets »