These days there’s no shortage of opinion regarding the size and role of government.

But one thing everyone can agree on; corruption has no place in any government.

In the USA we are lucky in this regard, but many (usually poor) people in developing countries don’t have that luxury.

I’m not talking about the stupidity of an elected official flying to Argentina on taxpayer’s money to visit his soul-mate. I’m talking about people having to pay local officials just to get business permits, drivers licenses, and even having a sick child be admitted to a hospital.

The World Bank has estimated that $1 Trillion are paid in bribes around the world every year.

But what can be done?

Shaffi Mather is a successful young [Indian] entrepreneur, whose goal is fighting the business of corruption in public service, eliminating it one bribe at a time.

And he plans to do it in a totally capitalistic way. It turns out there is a lot of gross margin to be made when you are operating in a $1 Trillion market. 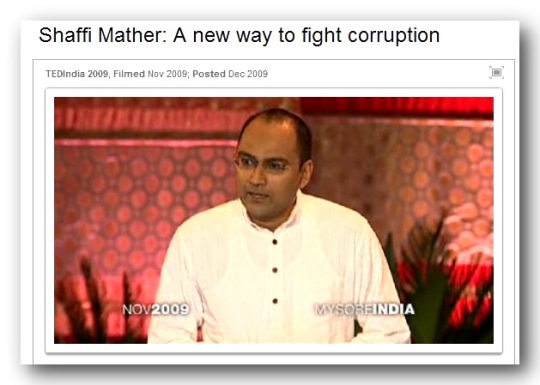 Click On This Image To Watch Shaffi's TED 12 Minute Talk

You can watch Shaffi describe his idea in a 12 minute talk at the TED Conference in Mysore, India which he delivered last month.

In the lecture he begins by describing 298 for Ambulance a for-profit emergency medical service he founded. It operates on a sliding scale payment system that has revolutionized medical transport in Mumbai and Kerala and it is self funded.

That amazing success lends credibility to his even more exciting anti-corruption idea.

If you are like me you will stand up and applaud at the end of the video.