The Swiss Step Poorly, Falling Off The Mont(blanc)

As recently reported in the Financial Times, the Swiss have stuck their foot in it once again,

The Swiss penmaker Montblanc, in a jarring attempt to raise its profile in India, has unveiled a gold-and-silver fountain pen to commemorate Mahatma Gandhi, the independence leader whose austere asceticism was at the heart of his liberation campaign.

The limited-edition Mahatma Gandhi pen, priced at Rs1.1m ($23,000, €15,800, £14,400), has an 18-carat solid gold, rhodium-plated nib, engraved with Gandhi’s image, and “a saffron-coloured mandarin garnet” on the clip. The pens were unveiled this week, before the national holiday on Gandhi’s birthday. 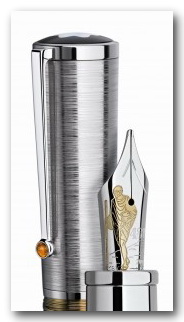 And here is the rhodium-plated nib of the pen, where Gandhi, with his bamboo stave in hand, is engraved. Classy, eh?

Looks like a bit of a marketing oxymoron, given that Gandhi was famously Non-Elitist as described in Wikipedia,

As a practitioner of ahimsa, he swore to speak the truth and advocated that others do the same. Gandhi lived modestly in a self-sufficient residential community and wore the traditional Indian dhoti and shawl, woven with yarn he had hand spun on a charkha. He ate simple vegetarian food, and also undertook long fasts as a means of both self-purification and social protest.

So it looks like the Swiss are going down 0 for 2, what with their miserable showing in the Polanski affair.

We note that the Swiss are conspicuous by their absence from the recent poll on National Self-Interest.

Perhaps they’ve covered the mirrors in their house, or at least should consider it.

Note: At first I thought FT had made a mistake, because Montblanc is headquartered in Hamburg, Germany. But with some further research I discovered that in fact the company was founded in 1906, and is a subsidiary of Swiss holding company Compagnie Financière Richemont.