That’s just my opinion, but the evidence is all around us.

An ending so good, we can drink to it. 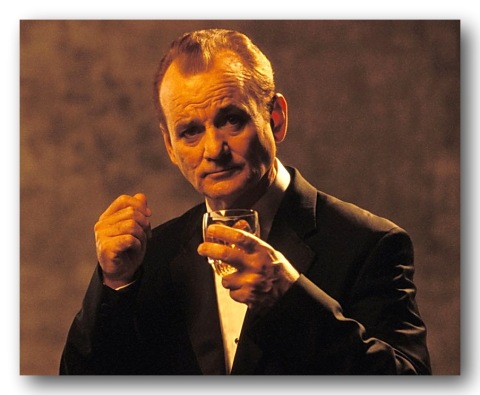 Being Lucky Never Gets Lost In Translation

Diageo, the maker of Johnnie Walker whiskey, found an innovative way to plug a gaping deficit in its pension plan: put aside 2 million barrels of maturing whiskey from its distilleries in Scotland.

Diageo said Thursday it would transfer ownership of £430 million, or $645 million, worth of whiskey to a pension funding partnership. Diageo employees would not receive their pensions in whiskey rather than cash, but the move does give them a guarantee that they would not walk away empty-handed should the company default.

By the way, that picture of Bill Murray is from Lost In Translation, one of our all time favorite films. Five Stars at least, and Bill Murray should have gotten Best Actor for his role as Bob Harris, an actor in Japan for a week doing whisky commercials.

In the film Harris was working for Suntory, and the film takes its title from the scene where Murray is attempting to deliver the famous line,

With Diageo’s announcement, now we could change that to,