I’m late to this party and probably over my head but that’s never stopped me before.

Let’s talk about Art and Celebrity.

What got my attention the other day was reading the lyrics to a Nora Jones song. I can’t remember which particular song, but it doesn’t matter. The point was that the words themselves were brain-dead. Maybe worse. But out of those terrible lyrics Nora Jones created an incredible work of art. Most of the time I don’t appreciate the genius of this kind of artist because they make it seem so natural.

Next let’s jump to acting. Once again we start with a script that has dialog, story line and stage direction. But when you look at the finished product from a great actor it starts to become clear how much talent is involved in creating the character. OMG, that character was created from virtually thin air. Once again the good ones never make it look hard, so I don’t appreciate how much work and talent went into the role.

Which brings me to my friend Tony (not his real name). I used to work with Tony. By a quirk of fate Tony looks exactly like Viggo Mortensen’s character Aragorn in the Lord of The Rings Trilogy. And I don’t mean kinda looked like him, I mean exactly, specifically, unquestioningly looked like him. 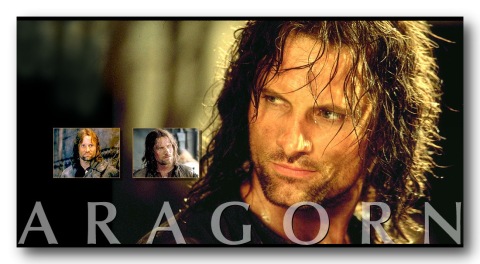 Tony worked out at our local health club and was really buffed, so the physique was Aragorn’s. He had the same day or two beard growth, and his hair was long and once again perfect for the role. He was also a modest kind of guy so the personality wasn’t hugely off base either.

When I asked him if he was aware of his likeness he said yes he guessed he was, since people in the street would do a double take and then say something. At this point I need to point out that Tony looked like this before LOTR, and still looked the same after the clamor for LOTR died down.

Last month Cormac McCarthy’s ‘The Road” was released to theaters starring Viggo Mortensen in the lead role. When I saw the PR pictures that were promoting the film I was shocked. Shocked!

Because I expected to recognize my friend Tony in those pictures, but instead it was Viggo Mortensen in a different role. Didn’t look anything like Tony!

Point being that Tony looks like Aragorn, not Viggo Mortensen. There’s a big difference.

Which leads us to the 12,775 women that spent some quality time with Warren Beatty.

« Yes Mr. Galassi, There WAS More To Publishing Than Met The Eye
And When Pigs Can Fly, Multi-Tasking Will Be Safer Than Driving »