As I’ve mentioned before, I grew up in the Bronx during the 50’s.

We had all the modern conveniences. Like Good Humor Ice Cream delivered daily in the summer down at the corner. Served up by the Good Humor Man himself.  Otherwise known as some kid with a summer job, but at the time he looked pretty big to me.

If you got an ice cream cup instead of something on a stick, it came with a little flat wooden spoon. If you chose the ‘ice’ on a stick there was work to be done to peel the paper off before you could take that first cold bite which froze your mouth and throat in a wave of pain when you swallowed.  Which tasted really, really good in the midst of that summer heat and killer humidity.

Up in our apartment we didn’t have air conditioning, but we did have Seltzer every night with dinner. It was delivered every week by, wait for it, The Seltzer Man.

Again, no surprises in the 50’s

The Seltzer came in wooden cases filled with 10 or so big green, blue or clear bottles with embossed logos and lettering on the surface. On top was a silver colored valve, sporting a hair trigger. I think the bottles in this picture are a bit vintage, but it gives you an idea. 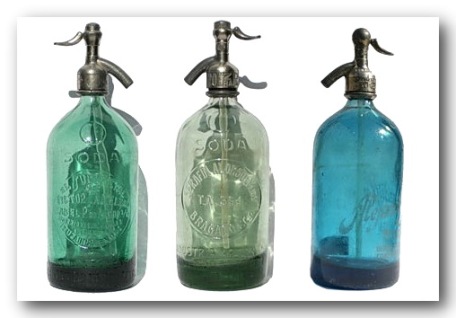 The first time you opened the value on a new bottle the pressure would invariably shoot seltzer all over the kitchen. It was absolutely, positively impossible to open the value slow enough to avoid that first spritz. Kind of like when you first learned to drive with a stick and were letting out the clutch with your Dad telling you to go slow.

But I digress, again.

This was all brought back to me recently by an article in the NY Times about Ronny Beberman, one of the last Seltzer Men.

Remember kids, we are not talking about some pansy Perrier with a twist of lemon.

We have a product we are real proud of, that starts with New York City water which “comes right outta the pipes, right outta the ground” and  then beaten (literally) into Seltzer. Watch the video if you don’t believe me.

This is Manly Seltzer, delivered by a Man’s Man.

[Full Disclosure Note: At one point back in the 50’s we learned that these bottles had a disconcerting habit of blowing up once in a while if there was a defect or chip created during the re-cycle process. After that discovery my Dad wouldn’t put the Big Bad Boy right up on the dinner table. They hadn’t invented Class Action Lawsuits yet, otherwise it would really have been all over.]