We’ve always been a fan of The Darwin Awards,

A Darwin Award is a tongue-in-cheek honour named after evolutionary theorist Charles Darwin. Awards have been given for people who “do a service to Humanity by removing themselves from the gene pool” (i.e. lose the ability to reproduce either by death or sterilization in a stupid fashion) … “The Awards honor people who ensure the long-term survival of the human race by removing themselves from the gene pool in a sublimely idiotic fashion.”

The only trouble with the Darwins is that you pretty much always know the ending of the story; the subject kills themselves in a stupendously stupid fashion.

The other day we discovered the Ig Noble Prize, which attracts us because of its diversity.

Ig Nobel prizes, awarded to scientific achievements that “cannot and should not be reproduced,” are presented in the week before the real Nobel prizes are announced and are sponsored by the science humor magazine “Annals of Improbable Research.”

Of this year’s Ig Nobels, our favorite was in the category of Public Health, awarded to Elena N. Bodnar, Raphael C. Lee, and Sandra Marijan of Chicago, Illinois, USA, for inventing a brassiere that, in an emergency, can be quickly converted into a pair of protective face masks, one for the brassiere wearer and one to be given to some needy bystander.

Even better, Paul Krugman our favorite Nobel Laureate in Economics [who also writes on the Opinion Page of the NY Times], personally donned the device during the recent awards ceremony at Harvard University.

Bodner With 3 Real Nobels, Krugman On The Far Right

Not only did Bodnar, Marijan, and Lee receive their Iggy, they also were granted a US Patent. 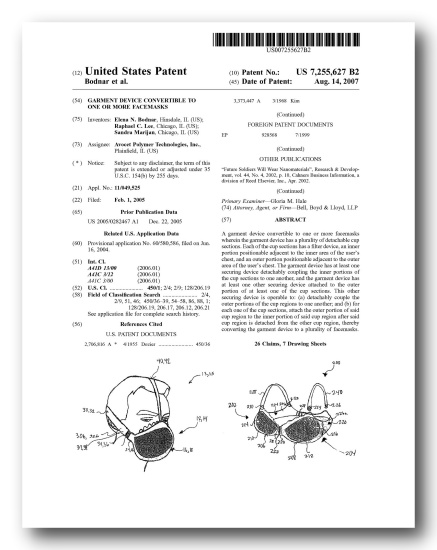 Terror Attacks Or Swine Flue, We Are Protected

The only downside is that if they ever commercialize this product, it will not be exportable because of its Dual Use Technology.