Airlines Will Run Out Of Fees, But Only When Pigs Can Fly

It is entirely possible that Airlines will soon revoke the law of diminishing returns.

And I’m not talking about their profits, but instead their ability to come up with new ways to tack on charges.

Board the airplane sooner and get earlier access to overhead bin space with Premier Line. You’ll also enjoy the benefits of priority check-in and priority security, where available. Premier Line is now offered in all United® and United Express® airports in the U.S.

So United will now charge you to board the aircraft earlier than your seat-mates. They should more honestly call it ‘Front Of The Line’, but that would invoke images of class warfare. 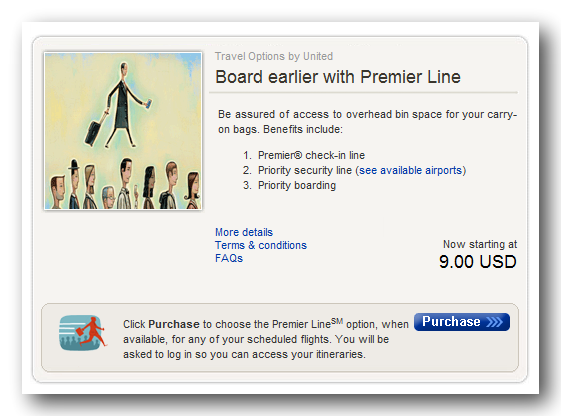 There Is Really No End In Sight

They’ve figured out that as more people bring along carry-on baggage, overhead bin space is becoming a scarce resource, and passengers  will pay for a leg-up so to speak.

And how much will they pay? The ad says it is ‘starting’ at $9, but we know that’s a teaser.

So I checked it out on my favorite San Francisco to London flight. In that real world case the actual charge $39 per passenger, one-way.

That doesn’t really guarantee you anything except the opportunity to stand closer to the door.

I’m not sure how many passengers will jump at this option, but I think there would be a larger market for the opportunity to get off the plane earlier.

« It’s Emmy-Time, And I’m Still A Free Agent
To Bundle Or Not To Bundle, That Is The Question »

9 thoughts on “Airlines Will Run Out Of Fees, But Only When Pigs Can Fly”