Another Great Tearjerker – Links to Spoiler

We watched Will Smith in Seven Pounds last night, and I give it 5 stars. In addition to being a great tearjerker, it has a bit of mystery. Plus I think Will Smith is an outstanding actor. When they make a film about Barack Obama, he will get the part for sure…check out his ears! 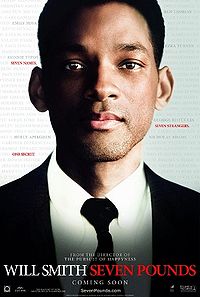 Haunted by a secret, Ben Thomas looks for redemption by radically transforming the lives of seven people he doesn’t know. Once his plan is set, nothing will be able to stop him. At least that’s what he thinks. But Ben hadn’t planned on falling in love with one of these people and she’s the one who will end up transforming him.

Here are links to film summaries. Be careful, they are spoilers, and you want to watch the film before you read them.

Prior to the film’s release, the title Seven Pounds was considered a “mystery” which the studio refused to explain. Early trailers for Seven Pounds also kept the film’s details a mystery. Director Gabriele Muccino explained the intent: “The [audience] will not know exactly what this man is up to.”

I like this spoiler at Wikipedia the best, but this link has more pics at IMDB.

3 thoughts on “Another Great Tearjerker – Links to Spoiler”